THE WORLD THROUGH PIXELS

JPEG or TIFF: that is the question

JPEG MAX compression is available in CameraPixels starting from v5.0.0

Prior iOS 10, iPhone devices were capable of shooting only JPEG and TIFF (using a third party app). Starting from iOS 10, iPhone 6S and newer devices have got a raw capture capabilities. This blog post is not about raw, but rather JPEG and TIFF formats, how do they differ, what advantages and disadvantages do they have.

Let us start by ruining one of the common belief  “TIFF is the ‘raw’ RGB pixels, which are not processed by image processing pipeline of an iPhone”. Yes, this belief was and still is quite common on various iPhone photography related forums. Here is a bad news for you, TIFF and JPEG images are both pre-processed (and sometimes heavily) by the same image processing pipeline. The difference is, of course in the compression applied to the image before saving, and that’s were TIFF is winning… or is it not?

Let’s first have a look at what type of TIFF images we can get from an iPhone. As was mentioned above, you can capture photos in TIFF format only by using a third party app and this should come as no surprise to you, CameraPixels is one of them. On iOS, the TIFF images can be saved without any compression at all or with a lossless compression, called LZW. In both cases the original image data is fully preserved. The file size of the non-compressed TIFF is stable and depends only on the currently selected resolution (for maximum resolution of 12.2 MPx the file size is almost 37 MB). On the other hand, LZW compressed TIFF may have a different output file size, and it depends on the content of a captured scene. The more details and textured object scene has, the larger the output file will be.

The TIFF file format  on iPhones usually saves images in RGB color space with 8-bits per channel (24 or 32 bits per pixels, depending on the presence of alpha channel). There is also a possibility to save 16-bit per channel TIFF images (48 or 64 bits per pixel), but in standard capture mode, there is no advantage to use additional precession, since the original data from camera comes in 8-bits per channel format.

To capture JPEG images you can use a standard iPhone camera app, but there is a catch (there is always one ;D). The standard iPhone camera app uses a fixed JPEG quality setting and chroma sub-sampling. Wow, wow, wow hold on, the quality of JPEG is understandable – higher quality, better the output image (less compression artefacts). But what on Earth is chroma sub-sampling?

JPEG is a lossy image file format, which means that JPEG sacrifices quality for smaller file size.  Unlike TIFF file format, JPEG uses YCbCr color space that is composed of luma component (Y) and chroma components (CbCr).  The JPEG compression algorithm takes advantage of the limitations of the human eye. It reduces the original image size by discarding additional information and detail that may not be as noticeable to the human observer.

Prior research has shown  that a human eye is much more sensitive to changes in luminance (brightness) than to chrominance (color) differences. Therefore, the JPEG algorithm usually discards mostly color information, while trying to preserve the luminance information.

Chroma subsampling is the practice of encoding images by implementing less resolution for chroma information than for luma information, taking advantage of the human visual system’s lower acuity for color differences than for luminance (from Wikipedia).  There are several chroma sub-sampling schemes exists, but on iPhone two are more common: 4:4:4 and 4:2:0.

The chroma sub-sampling scheme is expressed as a three part ratio J:a:b (e.g. 4:2:2), that describes the number of luminance and chrominance samples in a conceptual region that is J pixels wide, and 2 pixels high.

Because of the amount of information stored using 4:4:4 chroma sub-sampling scheme, the output file size may be up to 4x larger than those using 4:2:0 scheme.

TIFF vs JPEG MAX vs JPEG

Now that we know what type of TIFF and JPEG images can be captured with CameraPixels on iPhone, it’s time to answer the question of this post “JPEG or TIFF: that is the question”?

Since the TIFF is lossless format, it should be the preferred one for those photos that are expected to be post-processed. The JPEG is more suited for photos that are not expecting heavy post-processing or when a storage space is limited. But don’t jump to a conclusion just yet. Let’s try to compress the same image using TIFF, JPEG MAX (4:4:4 chroma) and JPEG 100% (4:2:0 chroma) and see the differences. The TIFF image will be the reference, since it’s a lossless image format and preserves all the original image data.

The original image was captured in RGB format at 640×480 pixels on iPhone 7 Plus (wide lens). 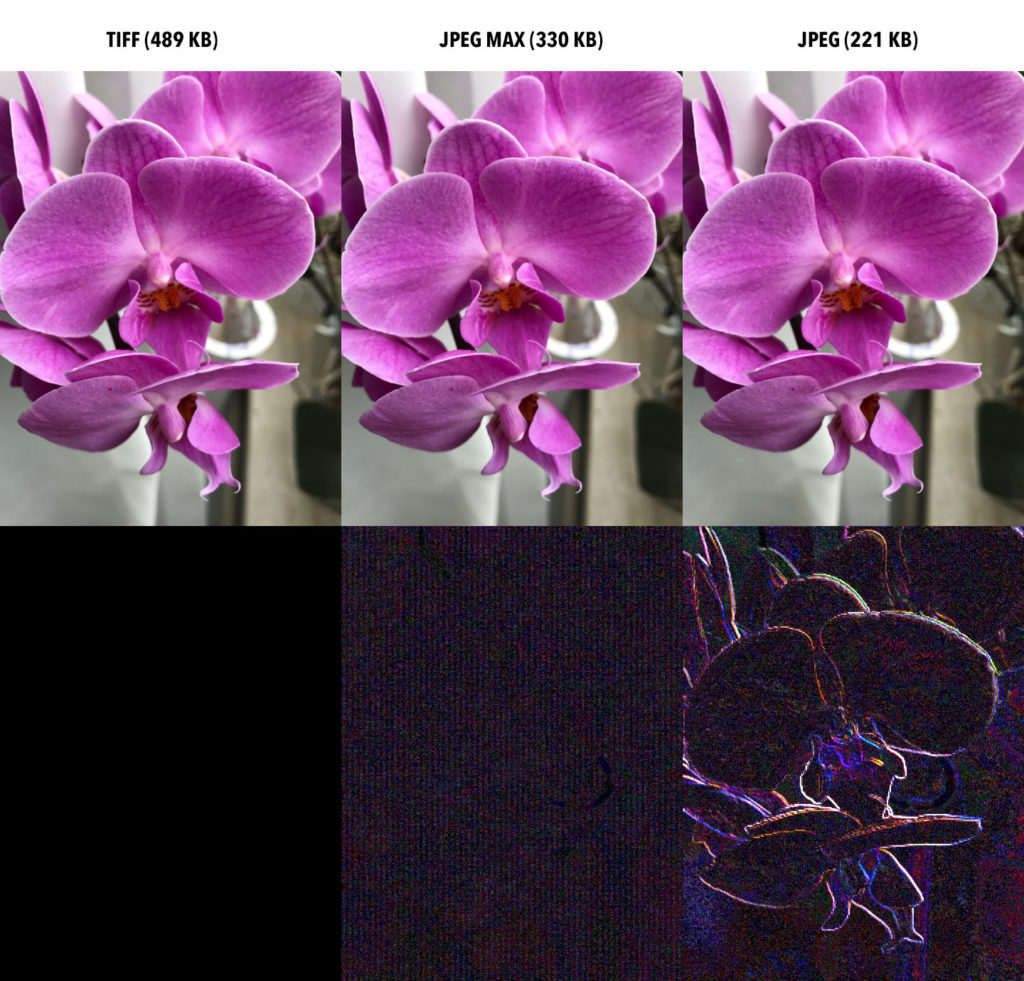 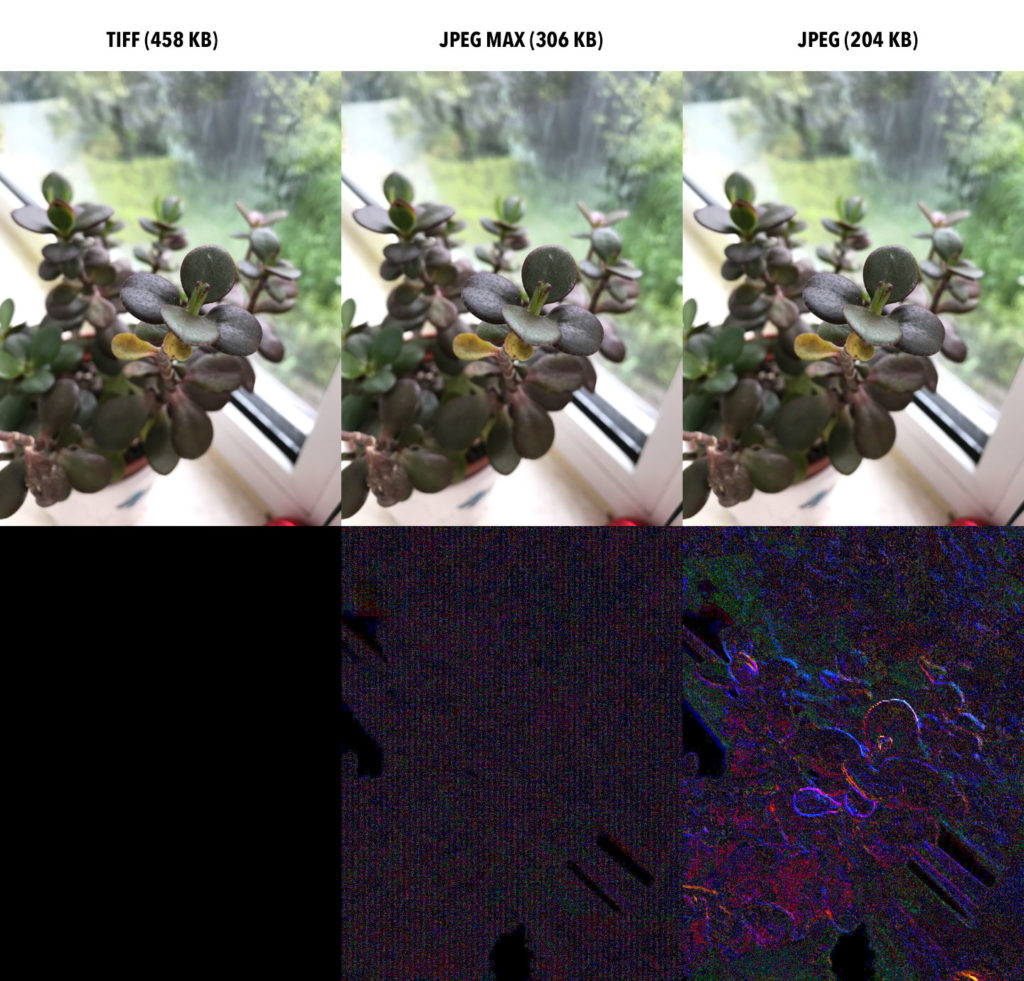 To visualise the difference images, the window/level operation has been applied with Window equals to 6 and Level equals to 3 (means that values from 0 to 6 were linearly scaled to the whole range of 0…255 values). As one can see from the above examples, JPEG MAX almost perfectly repeating the LZW TIFF image. With the standard JPEG (with chroma 4:2:0 scheme and quality set to 100%), there are some differences at the edges of objects. Even though the differences are not easily seen for both types of JPEG compression, one would want to prefer JPEG MAX or TIFF over standard JPEG when the captured image will be printed at a relatively large size. During the image enlargement compression artefacts may become more apparent.

From the above examples one can see, that JPEG MAX may replace the TIFF format in many situations, producing very similar result, while taking 1/3 of the time and 60% of storage of the compressed TIFF. The TIFF and JPEG MAX formats are well suited for cases when the highest quality of images is desirable and the captured scene is not very dynamic. For dynamic scenes prefer standard 100% JPEG output.